The album is scheduled for release through Superball Music / EMI and has already begun to receive some favourable reviews. 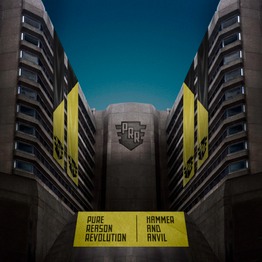 “A jaw-droppingly ambitious feat …one of the greatest new bands in Britain.” Rocksound

“In a world of musical conservatism, this lot walk unafraid” NME

“Merges rock with electronica in ways that not even Muse could possibly have imagined.” Classic Rock

Pure Reason Revolution are proof a band can be influenced by ELO, Smashing Pumpkins, Soulwax, Depeche Mode and The Beach Boys all at once, yet make sense of a vision that brings those disparate voices together into a sound that combines electronic dance rhythms, pop hooks and sublime vocal harmonies with huge rock riffs. Over the years PRR have ‘stuck to their guns’ and built a formidable live reputation sharing stages alongside the likes of Mew, Porcupine Tree, Secret Machines and Editors. “When we started we were unaware of what we could achieve as individuals, now we’ve all learned what our strengths and weaknesses are and how to use them.” (Chloë)

The album is actually the third full length release from Pure Reason Revolution and is inspired by a myriad of influences, but in one particular, war. “I’ve been researching my ancestry; specifically Great Granddad & his role in WW1… I’m staggered by the sheer enormity, the valour, the dead, the mass destruction.” (Jon Courtney)

Regarding the recordings Jon states: “The recording process  was new territory for me; some songs I’d take to Tom fully developed & with a large palette of sounds, others were simple vox/piano sketches that were then built into complete productions. It was a really exciting collaboration.”