The album was mastered recently by John Webber at Blue Pro Mastering.

An opus of a record, Rob Cowen’s, ‘Saturday Night And Sunday Morning’ is rich in epic and elegiac narratives that project stories of urban existence into a mix of grand, full-throttle indie anthems and raw, heartbreaking ballads.

Dubbed ‘The British Arcade Fire’ by BBC Radio One DJ Kissy Sell Out, with ‘lyrics worthy of John Betjeman’ (Q Magazine), Rob became the first unsigned artist to twice be awarded Q’s ‘Track Of The Day’ before bursting onto the likes of Radio 1, Radio 2, BBC 6 Music and Xfm last year and this 15 track epic debut does not disappoint! 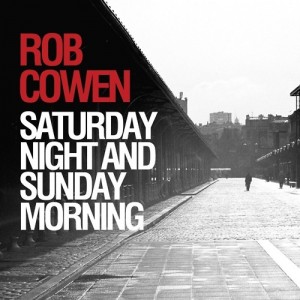 The epic single ‘Heartache’ is the final part of a three video series, edited with images from the original cult Albert Finney film of the same name as the album. Part 1 and Part 2 accompanied remixes of Heartache by James Yuill and Your Hands. All three videos are available to view at the youtube link below.

Most astounding is discovering that every song sounds like a classic. It is the rarity of finding an album and artist so fully formed that they feel both timely and timeless: the finger-picked fiery Martin, the crunchy valve guitars, the words, Rob’s voice, the silence, the waiting, the tensions. You have to be good to sail against the prevailing wind, to lay your heart on the line with such conviction, but by daring to be different to the glut of anodyne songwriters on the scene, Rob soars above his peers. You will remember where you were when you hear the raw passion of tracks like ‘Heartlands’, ‘Echoes’, ‘Black Eye’, ‘Queen of the Valley’, ‘Colette’ and single ‘Heartache’ for the first time. Before you know it, you have given your heart and soul willingly.