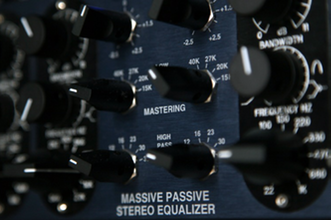 This 2 channel 4 band EQ is a ‘passive design’ meaning that the EQ stage has no further amps and is largely made up of components that don’t require additional power. When you boost a frequency band it’s actually cutting the remaining signal content with the gain made up by tubes post tone shaping.

Only the metal film resistors, film capacitors and hand-wound inductors mould the sound during the EQ stage. The Massive Passive is similar to the old Pultec equalisers such the MEQ5 and EQP-1A. These were first designed to be transparent sounding solutions before the advent of solid state electronics, but what we are left with is distinctive warmth, subtle tube saturation (without too much ‘fatness’) and a particularly pleasing musical top end. It’s also transformer balanced which seems to adds some extra fizz. These transformers were custom designed to help the EQ achieve large boosts and cuts (+-20db in fact). The passive filters can also be useful in achieving clean sounding slopes.

Even though the device has a low noise floor for a tube design we have further customised the tubes at Blue Pro and reduced the noise floor by as much as a ‘massive’ -20db. At Blue Pro we also have the stepped mastering version of the Massive Passive to avoid phase inaccuracies between the left and right channels. Like most tube gear it can take a lot of level and brings just enough colour to be an ideal mastering solution for mixes that a may require extra flavour, such as those that have been processed predominantly or entirely in the digital domain.

The Massive Passive is a common EQ choice in many top studios, It has a classic vibe but with fully parametric capabilities, four bands and filters. Many have actually become accustomed to that classic ‘Pultec type’ sound which is rich and musical. It tends to soften and enrich where others are aggressive and upfront, a particularly useful characteristic for higher frequencies. I’ve often heard of mix engineers using the Massive Passive in conjunction with various SSL consoles with a shelved high frequency setting in order to avoid the SSL’s aggressive sounding high end.

The Massive Passive works well in both mastering and mixing applications because it allows you to enjoy the Pultec sound, even down to the classic ‘dipping’ effect that is achieved by using the high frequency shelf. All this without the noise floor and an inconstancy of a vintage EQ, which can be is hard to implement into a modern mastering situation. The ‘colour’ an EQ offers has to be backed up with technical reliability and performance and the Massive Passive certainly has this. Punching in the EQ flat (but engaged via the two blue bypass LED’s) also excites the top end and gives mixes an almost Fairchild like (but less fat and more excited) 3D feel, so using the Massive Passive merely as a signal path rather then a tone-shaping device can be very effective. In a mixing situation it’s a good all-rounder, particularly appropriate for vocal processing, strings and acoustic guitar.