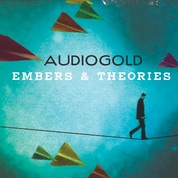 This month sees the release of the long awaited debut single ‘You & I’ and album ‘Embers & Theories’ from new UK four piece Audiogold.

Recently signed to JAMC / ChinChin Records within days of completing their album it has been a quick turnaround for this London based band, and with good reason. Their album ‘Embers & Theories’ is an inventive and absorbing blend of rock, pop and folk that sets them apart from the endless stream of other bands we have seen this year. Throughout all ten tracks this is something overwhelmingly accomplished for an independent release and is not too be missed.

The album was mastered at Blue Pro Mastering by John Webber who was equally impressed by the album, ‘Embers & Theories brings all the attributes of a great UK indie rock band but the funky, organic feel of the songs and their string arrangements in particular impressed me the most.”

The response to both the single ‘You & I’ and the album ‘Embers & Theories’ has already been getting an excellent response from radio and press.

“Audiogold are a refreshing change, a bright beacon on the horizon… a cross between The Sundays, Starsailor and Jeff Buckley – Never Enough Notes

“They range across a diversity of musical influences, without sounding like a watered down version of any of them” – The Indie Bands Blog

If you haven’t already been able to catch one of Audiogold’s gigs around London don’t despair, If this release is anything to go by you should be hearing a lot more from them soon as the major labels may be outside already.