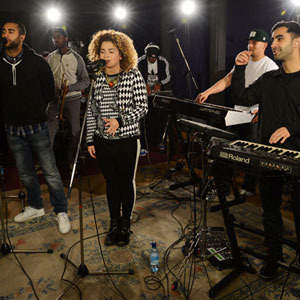 Seemingly appearing from nowhere in 2012 with their U.K. number one single Feel the Love, London based electronic outfit Rudimental had originally come together a few years earlier as the production name of duo Piers Agget and Kesi Dryden. Agget’s DJing brought him into contact with DJ Locksmith, who joined the pair, followed later by a chance meeting with Amir Amor at a studio in Hoxton, London. Rudimental’s first release, the dancehall-inspired Deep in the Valley, appeared on garage, grime, and dubstep label Black Butter and was quickly followed by Speeding and Spoons. Picked up by Universal Records off the back of their first few singles, 2012 saw the release of the drum’n’bass roller Feel the Love. Championed by Zane Lowe on BBC Radio 1, the single reached the top of the U.K. charts the same weekend as the four-piece played on their home turf at the Radio 1 2012 Hackney Weekender. In 2013 Rudimental’s debut album Home arrived. Working with some of the U.K.’s finest talent including the voice of 2012, Emeli Sandé, the album’s mix of dubstep, R&B, house, and drum’n’bass received positive reviews and went straight into the number one spot on the U.K. album chart. ~ Rich Wilson, Rovi